This is a collection of things that I found useful either from other users or myself along the way.  Hope they help.
Random Building Tips
This is a big project, so any little thing that helps can make a big difference.  Here's a few random things that helped me.
Working With Fiberglass
Fiberglass has its challenges when working with it.  These are a few things that I've been able to pick up along the way that have helped considerably.

Plastic Peel Ply
This is a method that I got from John Slade's site.  Basically, this involves using a sheet of plastic over the finished layup while it's still wet to then squeegee the excess epoxy out.  This does a couple of things.  One, it helps to remove a lot of the trapped air in the lay-up without allowing it back in.  Two, it creates a smooth surface rather than leaving the weave texture surface you normally get.  This makes finishing the plane later much easier.  The technique also allows parts to be made approaching the lower weights obtained by vacuum bagging.  It also tends to remove many of the pinholes that can be present in a standard lay-up (this will be good for gas tank construction).  What's the down side?  Well, it's extra material to use, an extra step in the process, and the smooth surface must be sanded before more fiberglass can bond to it.  Peel Ply does similar effects (smooth surface, removes excess epoxy), but it leaves the surface ready to bond more glass.  However, because the fabric is porous it doesn't reach the same weight savings as the plastic though it can still get close.  It can be more difficult to see smaller air bubbles in the layup especially if they're below the surface.  I can see bubbles all the way to the foam through plastic, but peel ply will look fine until I see small trapped air after removing it (this mostly applies to multilayer items as bubbles are easier to see in the first ply).  The type of plastic used makes a difference as well.  I started out with the standard plastic rolls you find at home improvement stores.  They're typically 4 or 6 mil, not completely transparent, and tend to not be the smoothest, but they do work.  I later switched to rolls of Mylar because it's completely transparent and has a very smooth surface.  It's thinner, so when I overlap sections the interface line between the sheets is very small and will be easy to deal with during finishing.  I also had an easier time getting air out because I could see it better.  You can order Mylar, or if you can find someone who uses a rolled product that has a Mylar backing you could get the leftover backing material.  Another option appears to be clear gift wrapping that can be purchased fairly inexpensively.  The process involves the following:
Another method can be done where you can use the plastic to squeeze out the air, then pull the plastic off parallel to the surface to avoid pulling up the layup, stipple down any loose areas, then cover with peel ply.  This will get a fairly light layup with minimal air and still leaves a rough surface for bonding to.  I found this useful for some areas as peel ply is harder to see air within layers of fiberglass (easy to see surface air though) but the plans called out for a peel ply surface.
BID Taping / Re-enforcement layups
A neat trick that helps with BID taping and some smaller layups such as the landing gear layup is to sandwich it between plastic.  Basic construction practice is as follows: 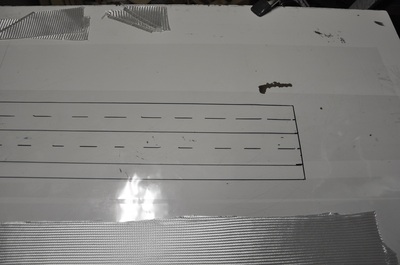 1. Draw out the tape templates. In this example, I drew two tapes next to each other. The dotted line is a center line for helping with alignment. 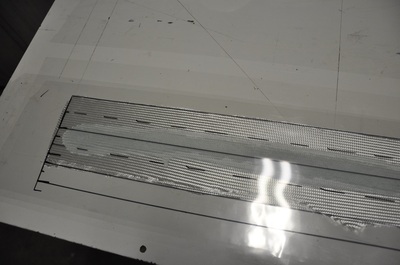 2. Place the BID tapes on a sheet of plastic. Pour the epoxy out on the tape then cover with the marked plastic (ink side out). 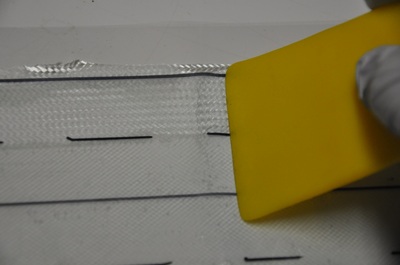 3. Start spreading the epoxy to absorb into the glass. Use a squeegee to remove air bubbles (this is just like the plastic peel ply method). 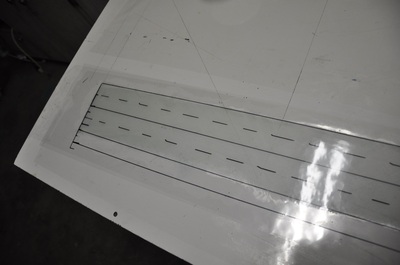 4. Fully wet out the glass, then cut along the lines. By using one piece of fabric for two tapes, you only have to make one cut to get two edges done. 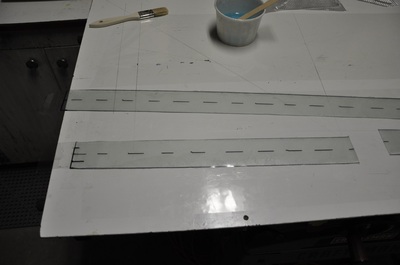 5. Once cut, the tape is neatly stored between two sheets of plastic. This can be taken over to the area without disturbing the fibers. 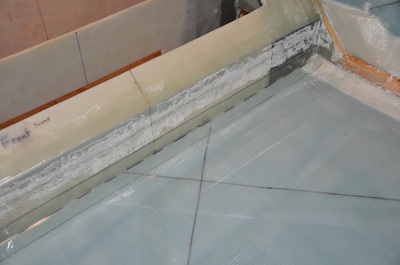 6. Spread extra epoxy onto the prepared area. Peel the non marked side of plastic away, align the center with the middle of the joint, press in place and remove outer plastic. Finish the edges with peel ply or plastic. 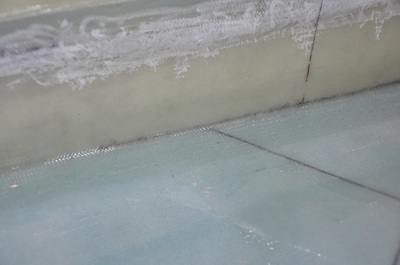 After cure, remove the edge treatment and check. You'll have nice straight taping with smooth edges. 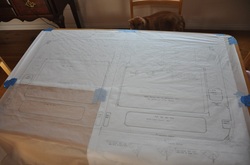 Tracing M-Drawings
There are two ways to get your full size M-Drawings: Trace out the other side from the half drawings or pay for the full size M-Drawings.  I chose to trace out mine.  Supposedly, the full size copies aren't exactly the right size, but many have made them work.  Tracing isn't too hard and it gives you a chance to really study the drawings.  By tracing the drawings, you retain a copy for reference or if you need to do some parts over.  There are a lot of details on some of the drawings that aren't used until later, so it's good to have a reference.  The tracing will also give you one piece that you can easily see the lines on which will simplify the pattern transfer.  Here's how I traced mine out. 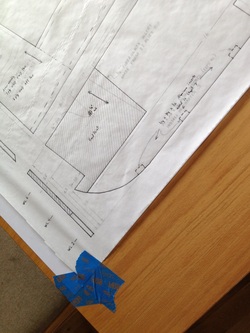 Plastic Sandwich Bags
Go to Costco and stock up on a case of these.  They are very useful for applying 5 minute epoxy to join foam boards, to squeeze micro into corners for fillets, and to add flox or micro to join pieces with.  The basic idea is to cut the tip off of a bag filled with your material of choice, then you can squeeze it out in a neat line, much like icing a cake with an icing bag and tip.  They keep the mess down and, control the application of the material, and can then be thrown away when done.  Works wonderfully.
Hinge Method
This one comes from Wayne Hicks.  This is a neat way of gluing foam together nice and even.  The problem is that if epoxy gets above the surface, it's difficult to sand down smooth without hurting the foam.  So comes along the hinge method that allows epoxy to be applied and kept level with the foam.  Here's how it's done. 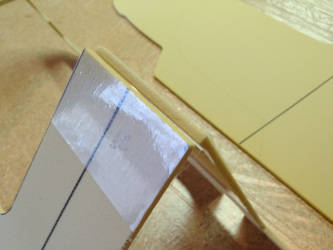 The following images are to illustrate the method described above.  I used blue painters tape and red icing to highlight the process better.  I don't recommend using painters tape for the real thing... or red icing... or any icing for that matter. 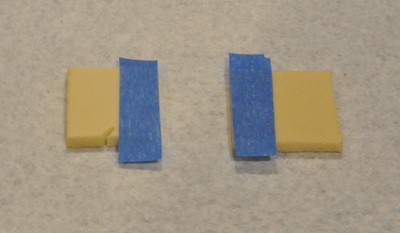 1. Tape over the top edges of each piece with clear mailing tape. 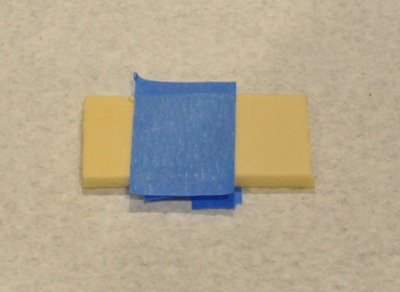 2. Turn over and place the pieces together then tape over the back side of the joint with clear mailing tape. 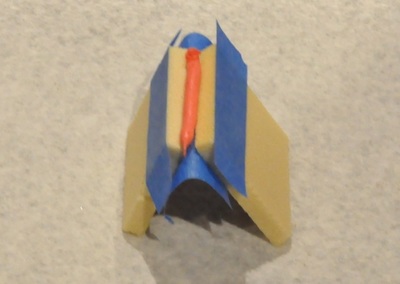 3. Turn back over and open up like a hinge. Add the epoxy to the gap. 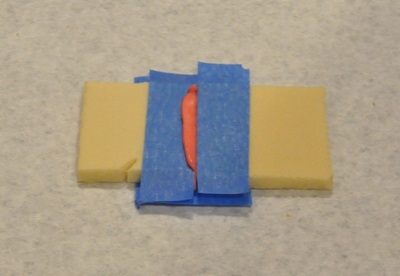 4. Close the hinge back up. The excess epoxy gets squeezed out the top. 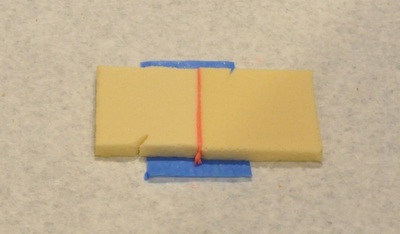 5. Wipe off the excess epoxy and remove the top tape pieces before the epoxy sets. Allow to cure. 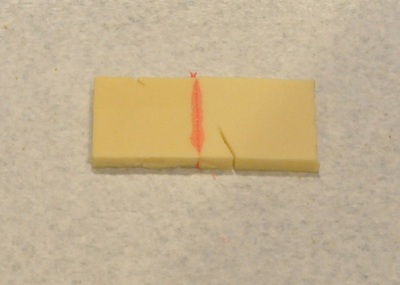 6. Once cured, turn over and remove the backside tape. Piece will be glued together with the epoxy flush with the surface.
Dry Wall screws (Or Composite Clecos)
This is a nice tip from Wayne Hicks.  Dry wall screws have a low body profile, but a nice wide threading.  This allows them to grab onto the foam rather well.  They can be used to temporarily hold foam together while assembling parts or to hold down to a jig and leave a minimal amount of damage after removal.  The hole left is easily filled with micro afterwards.  You can get a large box for not much money and they're reusable.  I also find that dry wall screws work well for screwing together jigs. When screwing to wood, make sure to drill a small pilot hole (1/8 inch works well for standard 1.25 inch dry wall screws). 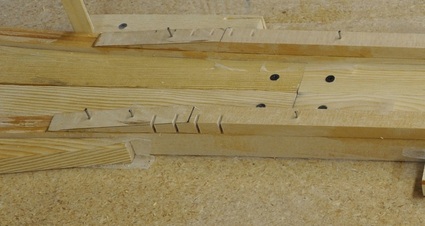 Finishing Nails
For some objects, I found it easier to hold down something using finishing nails.  These are thin nails with a small head so that they don't leave much damage.  Again, they can be bought in large supply for not much and work well for a variety of uses.  Good to have around in case you can't get a screw into a location. I used them for holding down the longeron doublers in place (leave a much smaller hole than regular nails) and for holding down foam to the jigs.  For wooden objects, you drill a hole slightly smaller than the nail so it will have some holding force when driven in.  Always leave enough exposed so you can pull the nail up with pliers when it's done the needed job.  For foam, you can just tap one in.  I use a second nail to help drive the first one just slightly below the surface to get better hold of the foam and not interrupt the glassing process.  When your done you just pull the nail out the other way or just pull up on the foam.  The hole will be very similar to the nail body size, which is minimal, and involves a lot less foam repair than 5 min epoxy would create.

Soldering Coax To Copper Foil
At some point, you will have to make your antennas (how awesome is it that we can even make our own antennas!).  There's not a lot of information on how to do the actual soldering, so people are left to figure it out on their own.  So here's what I found worked well for me. Use 60/40 electrical solder for best results.